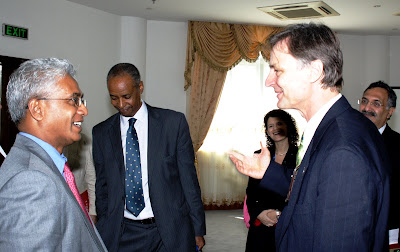 The UN Delegation is in Timor-Leste to listen to key interlocutors’ assessment of the situation in Timor-Leste and gather views of the role of the United Nations mission which will replace UNMIT. As part of the agenda the delegation will meet with Government, Opposition, Donors and Civil Society.

“They want to know Timor-Leste’s ideas in relation to the post-UNMIT arrangement . The idea is for us to have a strong delegation, a presence which politically is strong to dialogue with the government, mobilize financial and human resources for technical areas that we most need.” Minister Zacarias da Costa commented after the meeting.

Various options for the format of the next UN presence were highlighted at the meeting. This options will be part of a report with the appropriate recommendations, “We will live the decision to the next Government. I must say that we want to keep a long partnership with United Nations, but this Government can only recommend. We would like UN to continue to have some visibility here. A presence that must not interfere with the sovereignty of Timor-Leste” said Minister Zacarias da Costa

Also as part of this consultation will be held on Tuesday, the 31 of January 2012 at 9:30 am, in the Ministry of Foreign Affairs a round table with the participation of:

The meeting took place at the Ministry of Foreign Affairs, shortly before Ambassador Tiang Guang Fen presented his Letter of Credential to H.E. the President of Republic Dr Jose Ramos -Horta. 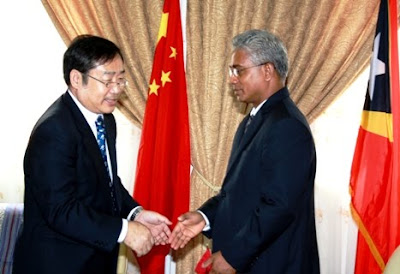 “The people of Timor-Leste are profoundly grateful for the support China is giving Timor-Leste”. The Minister da Costa added, “We hope that our relations will continue to develop at the bilateral and multilateral level. We are making big efforts to improve the country and that is possible only with the support of countries like China”.

Regarding bilateral relations between both countries Minister da Costa stressed, “The existing activities and projects can talk for themselves. Currently we have students on scholarships studying in China. We have also some professionals being trained in China. In the short term, we will start the construction of the building for diplomatic studies”.

Some of the major contributions of the People’s Republic of China to Timor-Leste, include the Presidential building, the Ministry of Foreign Affairs, and the Ministry of Defense.

Posted by Ministério dos Negócios Estrangeiros-Timor-Leste at 12:59 am 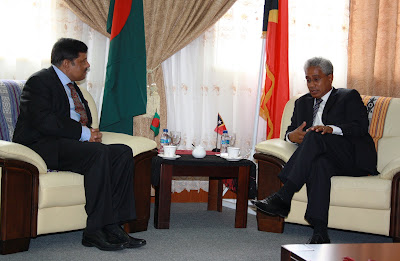 Ambassador Golam Mohammad is in Dili today (12-1-2012) to present his Letter of Credential to H.E. President Dr Ramos Horta 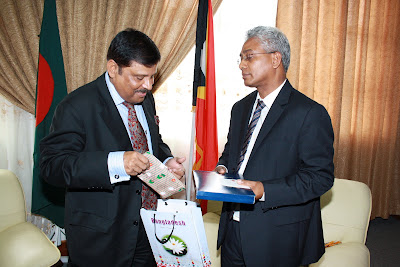 Prior to the event, Ambassador Mr Golam Mohammad, accompanied by his wife Mrs Shamsun Nahar, made a courtesy call on the Minister for Foreign Affairs Dr Zacarias Albano da Costa to present a copy of his Letter of Credential.

Minister Zacarias da Costa warmly welcomed Ambassador Mohammad and his wife and thanked the Ambassador for the continued support Bangladesh is giving Timor-Leste.

“I would like to acknowledge and thank you for the support you are giving us. The presence of your force in the UN mission is just one example of this support. We have to look for other areas of cooperation. We look forward to deepening our relationship in other areas such as fisheries, agriculture and health,” Minister da Costa said.

Ambassador Golan Mohamad said that Bangladesh is keen to help Timor-Leste in any way and emphasized the similarities between both countries. The Ambassador said, “We have same the issues, with similar challenges. The sentiment is there and we can work together”. Ambassador Golan Mohamad also said that “he had the opportunity to meet with the Bangladesh community working in Timor-Leste and the feed-back is that the community is very positive”.

Posted by Ministério dos Negócios Estrangeiros-Timor-Leste at 12:32 am